Here are three self-portraits of Steve Mann, each with one of the new musical instruments that he invented; rightmost with another musician. See H2Orchestra.

Due to the huge numbers of people who want to get pictures of me for various publications, I've signed up with EXISTech Corporation, as my image database manager. This is part of a non-profit picture database effort in which pictures of inventors and scholars can be freely used in scholarly publications and the like, so that the subject does not need to be constantly photographed again and again with similar pictures being duplicated by various photographers, simply because of copyright issues. This saves the subject a great deal of time, because otherwise the subject (say if he or she became well known and was being photographed for a large number of different newspapers, magazines, etc.) would be wasting a great deal of time being photographed by persons who take a long time to set up a picture with sophisticated lighting apparatus, etc..

Each participant can use images from the set, or take their own pictures to contribute to the set of images. Photographers who are not part of EXISTech Corp. simply enter their pictures with EXISTech so that others can use the pictures as well. (This saves wear and tear on the inventor or scholar from being photographed again and again where the pictures would otherwise each only be used once.)

These pictures were contributed by me (e.g. taken by me), but others can add further to this database subject to EXISTech's policy of Subjectright (S). Subjectright (S) is a relatively new concept, quite distinct from Copyright (C), in the sense that Subjectright places rights of control with the person appearing in the picture rather than the photographer. Photographers who work for EXISTech Corp. work on a "work for hire" basis, and assign their rights to EXISTech Corp. Then EXISTech Corp. assigns all of its rights to the person who is being photographed. In this way the Subject of the picture is the owner of the rights in the image, and is therefore free to grant a cost free publication right to anyone he or she wishes.

This enables the subject to grant various publications such as IEEE Transactions a royalty free license to freely publish the subject's picture, at the end of a scholarly article, or with a biography, or the like, as is commonly done in academic journals.

Pages Boostore mannequin, put together prior to the
4 eyetaps 0 ground book event

exhibited at Pages Bookstore, 2003 May.

Pictures of eyetaps when worn:

(click on image to get a larger version, approximately 6000 by 4000 pixels = approximately 70 megabytes uncompressed)
( click here to order a print of the wearcomp4 image)

A black and white (greyscale) version of this picture is also available. (click on image to get a larger version, approximately 24 megabytes when uncompressed.)

The leftmost picture from the above 5 images is available as a separate image.
There is also available another picture of this early rig.

Open style EyeTap Prof. Mann with his wearable computer system that looks like ordinary bifocal eyeglasses, lecturing in his class of ECE1766 cyborgs: 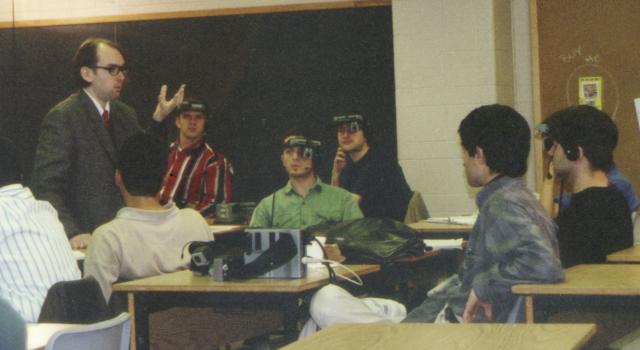 Existential Learning = ``Learn by being [a photoborg]'' ``Learn by being'': a step beyond learn by doing

The University of Toronto photoborgs ready to begin shooting in a shared computer mediated reality environment while collaborating on a production:

Other material and articles on the WearComp project

Beyond digital photography: The new imaging renaissance (A Mathematical framework for personal imaging)

An historical account of Prof. Mann's WearCam/WearComp inventions can be found here

The following piece was first presented officially by Dr. Mann at his keynote address at the Virtual Reality conference in Rio de Janeiro, June 1-6, 1998, but has existed for some time prior:

click here to order a print of the above "pleasewait" image
For more on the above piece, see: A humourous anecdote: Parody of the Time Thieves (with a Reflectionist performance)

A controversial critique of environmental intelligence and ubiquitous surveillance versus personal intelligence: ``Smart clothing: Turning the tables...'' (how wearable technologies can protect our privacy and freedom as the world around us becomes "smarter" and more intrusive)

Interrogative art, cultural criticism, etc.. (papers pertaining to the WearComp/WearCam inventions in the context of re-situating the common everyday computational facilities in a disturbing and disorienting fashion to challenge society's preconceived notions of these.) 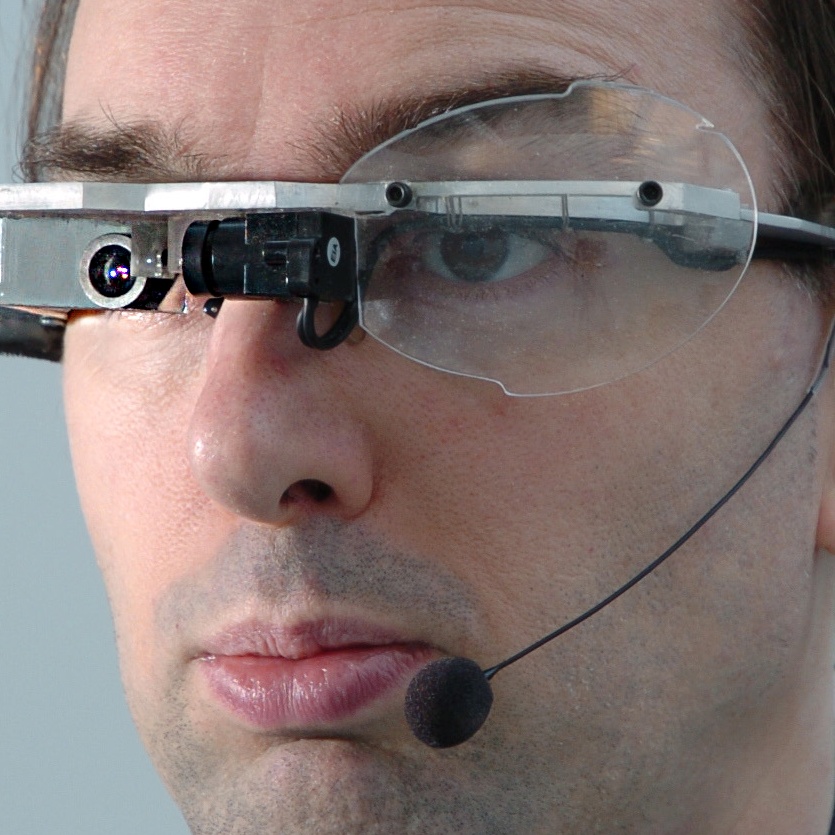 All images containing a likeness of Steve Mann are Subjectright (S) Steve Mann.